The ground rumbled as I sat near Jesher’s bed reading him a bedtime story.  At first I wondered if the second coming of Christ would interrupt my son’s fight and immediately remedy his ailments.  The ground continued to trimmer.  After peaking out of the window and seeing no blinding-lights in the sky, I conceded that the trembling was not caused by Jesus (and a myriad of angels) but caused by an approaching object.

Now my protective instincts kicked in; who would ruin the calm of a bedtime story with a terrorist attack?   The quaking became so unsettling that I had to leave the plush comfort of my rocking chair.  There was still no sign of the approaching monstrosity.  I gave Jesher one final gaze of admiration and then dedicated myself to laying down my life to protect my son from the wanna-be Goliath of Gath marching our way.  I steadied myself.  I mustered the little energy that I had left.  The curtains moved back, and I braced for impact.  I couldn’t believe what I saw; I was standing toe-to-toe with R2-D2’s grandpa.

The machine was heavy, loud, and old.  I honestly expected crazy Dr. Emmett Brown to run in caring a flux capacitor.  Previous to this moment, it felt like Jesher and I were enjoying Star Wars episodes 1, 2, and 3.  However, in less than ten seconds, we were sent Back to the Future and were instantly thrown into episodes 4, 5, and 6.  This machine was an antique.  It creaked like a geriatric patient.  And they were bringing it in to help my son breath better.

Was this the lung-messiah the staff preached about throughout the afternoon?  It looked like it was stolen off the set of The Wrath of Khan.  There were no touch screens.  There were no digitized controls.  There wasn’t even a sleek design.  It was bulky, it had wires coming from everywhere, and it looked like it went to school with Johnny 5 (from the film Short Circuit). But within forty-minutes of being retrofitted with a High Frequency Oscillating Ventilator (or HFOV machine), my son was breathing better than ever.

Yep, my prejudice was exposed, and I’m not ashamed to admit it.  Jesher had been struggling for the previous three days on the high-tech model.  The doctors did everything to tweak the settings of the more advanced support system, but no adjustment was able to properly regulate his oxygen and carbon dioxide levels…that is…until they rolled in ole’ faithful.  Ever since Jesher hooked-up with the old-school, his breathing levels have done a 180 degree turn.  Jesher is loving his throwback friend!  And I am now a believer in this timeless truth: ‘Newer doesn’t mean better.’

LUNGS–Jesher is still responding well to his HFOV [High Frequency Oscillating Ventilator] machine.  His oxygenation is stabilizing and he is even breathing well during care time (his routine check-ups that take place every three hours).  We are needing his oxygen support to regularly be sustained at 21%.  This is the regular level of oxygen in what is called room air.  PLEASE PRAY THAT THE LORD FULLY HEALS JESHER’S LUNGS AND ALLOWS HIM TO BREATHE REGULAR ROOM AIR WITHOUT THE NEED OF MACHINERY.

INTESTINES–Jesher was taken off of breast-milk for 24-hours due to his blood transfusions.  Yesterday, his feedings recommenced, but he is not moving his bowels as he was before his blood transfusions.  This could be highly problematic considering that the bowels are the primary way that direct bilirubin is released from the body.  PLEASE ASK GOD TO AWAKEN JESHER’S WASTE RELEASE FUNCTIONS SO THAT HE CAN FIGHT OFF HIS JAUNDICE.

BRAIN–Jesher’s brain (specifically his right side) has experienced injury due to internal bleeding.  He is currently responding well to light, sounds, touch, and taste.  We want Jesher to continue meeting these developmental bench-marks.  PLEASE PRAY FOR JESHER’S BRAIN; ASK YAHWEH TO PROTECT IT FROM ANY LONG-TERM DAMAGE.

BLOOD–Jesher is maintaining his red blood cell count, as well as his platelet levels, 24-hours after his blood transfusion.  This is a sign that his internal, blood-making systems are beginning to turn on.   As they turn on, we need them to sustain Jesher’s blood content so that he can move away from having more blood transfusions.  PLEASE ASK THE LORD TO SPEAK A LIVING WORD INTO JESHER’S BODY, ACTIVATING HIS BLOOD-MAKING PROCESS AND OTHER PHYSIOLOGICAL PROCESSES THAT ARE USUALLY STILL ASLEEP AT JESHER’S AGE.

For my generation, words like ‘dependability‘ and ‘consistency’ have been dethroned by words like ‘progress’ and ‘upgrades.’  That’s why I am so thankful for the reminder that awkwardly rolled into pod #34 two nights ago.  Progress cannot always be achieved by taking steps forward.  Sometimes, the best way to motivate improvement is to take a couple steps into the past, revisiting some of the tried-and-true methods of yesteryear.   I no longer call Jesher’s HFOV machine old; I call it retro.  Why?  Because Jesher’s support system isn’t obsolete.  It is classic, and it is just as effective now as it is was way-back-when.

Thus saith the Lord God unto these bones, “Behold, I will cause breath to enter into you, and ye shall live.”  Ezekiel 37:5 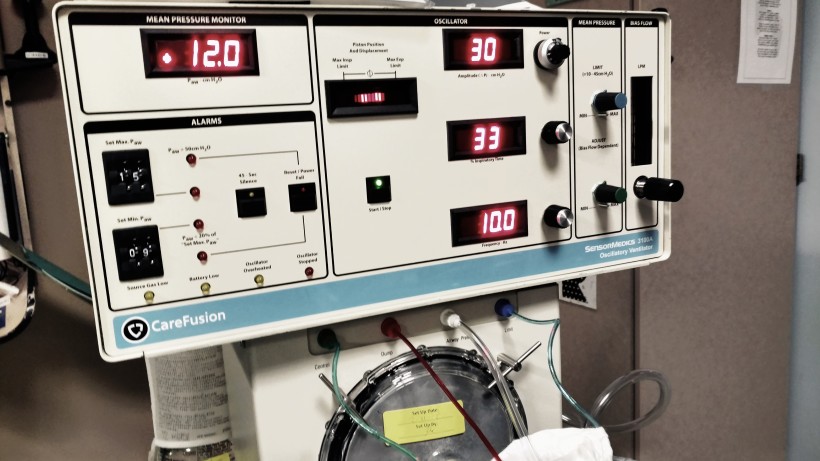 14 thoughts on “Retro Is The New Cool”