During Lhorraine’s pregnancy, I would often read Jesher literature that was far above his reading level.  Why?  I honestly don’t know.  Maybe it was the first signs of unrealistic, parental goal-setting.  Or maybe my obsession with superhero films has compromised my thinking…causing me to believe that Jesher is a level-five mutant that can understand any concept (Honestly, I still do believe this!).  Or maybe I was motivated by the fact that Jesher could hear me but he couldn’t understand me; therefore, it was more the sound of my voice, than it was the content, that mattered most.

Ironically, my favorite articles to read Jesher were articles detailing his development based upon his corresponding gestation week.  I wanted him to know what was going on inside his body and that meant teaching him his gestation chart.  I taught Jesher to appreciate the five nubs at the end of the four sticks he had attached to his torso.  He also knew about the cord that was attached to his tummy; I told him he could pull on it a little, but he couldn’t tug too hard because if he broke it he would have to buy it.  I would tell him what to expect in the upcoming week and which safe activities could help him pass the time.  I wanted him to learn about himself even in utero; I just never thought I would regret skipping the sections about premature birth.

Now, when I read the articles, a somber melancholy sweeps over me.  I think I keep reading each week’s gestational report out of curiosity.  Yes, it is heart-wrenching to read about the things Jesher should be developing versus utilizing, but I can’t help it!  I want to know which parts of his body need to be expedited by the Creator’s love.  And I want to speak encouragement to the organs that are attempting to respond to the crisis.  From his liver to his bone marrow, Jesher’s organs are being asked to function at 28 weeks like they are 38 weeks old.  His heart, lungs, and gallbladder are all attempting to do their best, but sometimes I can hear them all whispering to one another, “But we’re not ready yet.”

Jesher’s body is still in development mode, but we need it to be in execution mode.  It is a classic example of a ‘rude-awakening.’  One moment his system is building, and in one flash of a scalpel, his system is now forced to do a grand-opening while most of the supplies are still being shipped–due to arrive in 7-10 weeks.  He needs to feed, breath, fight bacteria, and poop, but this all has to be accomplished months before his body is ready to perform these functions.  His body is being forced to compensate where it can while hoping against all odds that the missing parts will arrive earlier than expected.

Every part of Jesher’s body is pulling four-times more weight than it should.  It is the most courageous thing I’ve ever witnessed.  Each cell is working two or three  back-to-back shifts without a break.  Some parts are holding up well.  Others are beginning to show signs of fatigue.  But no one is quitting.  Resilience, for Jesher, is not optional…it is mandatory, and it is clear; Jesher wants to live.

LIVER–Jesher’s Direct Bilirubin levels have not yet normalized.  There are two types of bilirubin: direct and indirect.  The indirect bilirubin has subsided (this is treated by the blue light you have seen in many of his pictures), but the direct bilirubin is quite high (this must be processed by his liver and released through his gallbladder).   Jesher’s liver isn’t supposed to be filtering at this level until 34 weeks.  So the premature age of his liver is impacting the body’s ability to discard the direct bilirubin (which is now beginning to deposit in his skin).  PLEASE PRAY THAT JESHER’S LIVER AND GALLBLADDER WOULD BE GIVEN THE STRENGTH OF A FULL TERM BABY.

LUNGS–Jesher’s lungs are beginning to fatigue.  His new machine (the HFOV) is supporting him better than is prior ventilator, but the improvement we were seeing in his breathing have slowed noticeably.  At 27 weeks, Jesher’s alveoli and capillaries have not fully opened.  At this age, his lungs are supposed to be building more sacs that will capture oxygen molecules and distribute them to the blood stream once he is born.  Now, the lungs are being asked to function and build at the same time which can slow both processes and cause long-term damage.  PLEASE PRAY FOR JESHER’S LUNGS TO REMAIN STRONG UNDER THE CURRENT STRESS; ASK YAHWEH TO ALLOW HIS LUNGS TO MOUNT UP ON THE WINGS OF EAGLES.

BLOOD–The heart and veins of a baby usually finish their development between weeks 35-37.  So Jesher is still struggling to create the necessary amount of red blood cells (which also require the development of bone marrow).  Right now, Jesher’s vascular system is attempting to complete its task with 60% of its work-force on hand.  Jesher needs his vascular system to develop exponentially faster than it is currently calibrated to grow.  PLEASE PRAY THAT THE LORD WOULD SPEAK A WORD OVER JESHER TODAY, ACTIVATING HIS VASCULAR FUNCTIONS AND MATURING THEM IMMEDIATELY–LIKE HE DID FOR ADAM AND EVE.

Jesher’s body is fighting an intergalactic war.  It is under-resourced; it is out-manned and out-gunned.  But it isn’t quitting.  Whether you compare it to Gideon’s 300 or King Leonidas’ 300, you would still fall short of citing a historical battle that is replicating the intensity of Jesher’s War.  My son is under-aged and in need of a lot of support, but there is one thing he doesn’t lack.  Jesher has been gifted an eternal supply of courage.

“So be strong and courageous! Do not be afraid and do not panic before them. For the LORD your God will personally go ahead of you. He will neither fail you nor abandon you.”  Deuteronomy 31:6 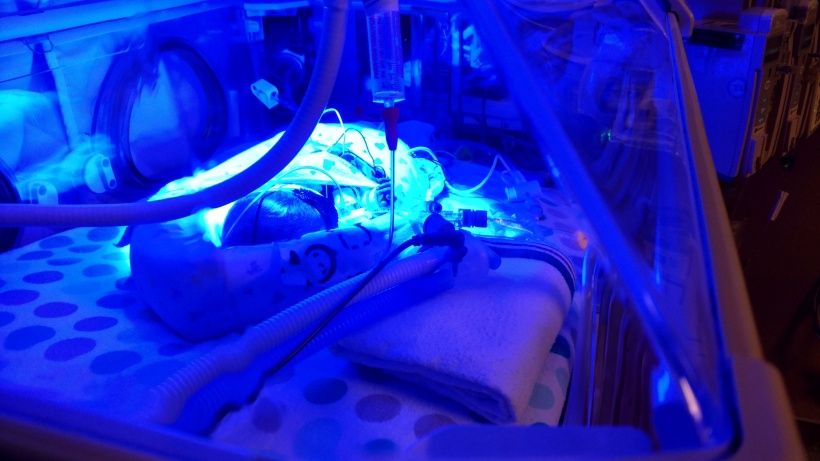